Guild Wars 2 is Arenanet’s newest edition to the Guild Wars series. Set in sometime in the future of “Tyria” from a previous game, Guild Wars 2 challenges many of the key conventions laid out by bigger titles. For years MMO’s alike have been struggling to challenge Blizzard’s winning formula. Many games improved upon some of the award winning developer’s techniques before quickly fading from the gaming spotlight. Well in my own opinion, ArenaNet’s newest addition “Guild Wars 2″ wont be leaving my hard drive for some time. While many games have broken minor fractions of the “rules” set by World of Warcraft, ArenaNet have successfully taken all that is good in various games and thrown it together to great effect.

The character types or “professions” in Guild Wars 2 are well arranged and allow for dynamic gameplay for all classes. Any MMORPG player knows what it’s like when nobody wants to play the tank, or the healer, or the dps, or support. Everyone of us MMO players knows the pain of sitting in a main city for hours on end looking for one last person to complete your group. In GW2 (Guild wars 2) every player gets self healing abilities and every player is in charge of their own traits; allowing you, if you wish, to focus on upgrading your health, armor or damage. In short, if you die in a dungeon its your own fault. Not the healer’s. Not the tank’s. It is minor yet game changing modifications like this that make GW2 a much friendlier game. The beautiful graphics (I’ll get to that shortly) coupled with the new style of gameplay makes Tyria accessible for both new players to the genre, and MMO veterans alike. Upon first glance GW2 may seems traditional. You run around doing things for people and they give you stuff and XP as a reward, you rank up and eventually hit a level cap. However, it does not take long for those impressions to change. Even as early as character creation you are likely to encounter ArenaNet’s “Dynamic Event System”. The first time I created a human character I found myself fighting off centaurs to cross a bridge and get to my next “quest”. The next time I was throwing water over flaming bails of hay in the exact same area. While you are likely to encounter the same event twice the experience is never the same. Some events overlap, some lead to other events and a lot of the time if you fail an event you will face consequences! The dynamic event system truly is one of my favorite parts of this game. Alongside the event system there are three other main sources of XP: Quests, Story Quests, and WvW (which we will get to later). Quests aren’t the traditional “go there and do this” that you might expect from an MMO. In guild wars a quest is to simply “help someone”, meaning there are usually a variety of ways to complete the quest. Your progress towards completing any quest is shown as a progress bar in the top right of your screen making it easy to work out the most efficient way to complete each one. Completing the quest will unlock a “vendor” which allows you to purchase a reward using “Karma”, a currency earned through events. Story quests lead you on your own character/class/race unique story in which you make many choices that help to make your own personal story-line a little bit more special. These can be done once every few levels and give a large amount of experience while telling the tale of Tyria and its foes and leading you on a well written story.

I’m going to avoid making this a “Top 10 best parts of Guild Wars 2″ list, mainly because 10 isn’t enough. That being said, my most favorite part of this unique MMO has to be its looks. While not the most realistic graphics, it has to be said that Tyria is extremely beautiful! ArenaNet opted for  painterly style skins and dangerous looking weapons, not to mention making every woman look like Megan Fox! Even when played on a low spec machine 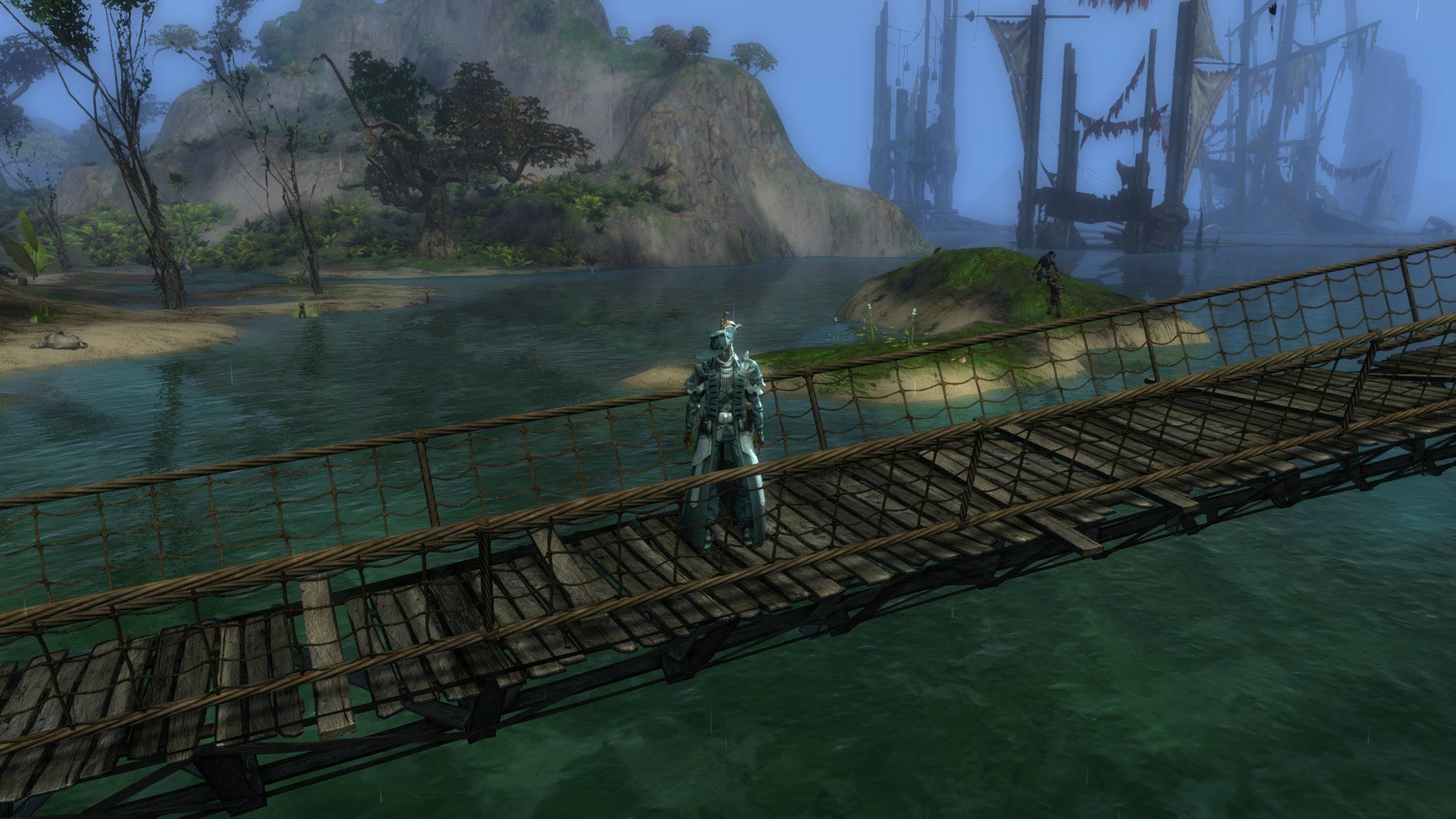 A screenshot of my character (medium level at the time) from Guild Wars 2. Click To Enlarge.

the environment still looks much better than World of Warcraft’s 8 year old graphics, as can be expected. I find myself constantly turning to whomever is in the room with me and saying “look at this, this looks amazing” or “wow, I could live here!”. Moments like these keep my interested in the pretty world that ArenaNet have created and push me to keep playing. Unlike WoW, Guild Wars 2 looks good and therefore it feels good to play. The way the environment looks plays a big part in GW2, the developers push players to explore rather than grind so it is important that we do not get bored of the areas we travel through, and ArenaNet did a great job at making every area unique and interesting. One minute you can be in a desert fighting off a dragon, and the next at the top of a mountain running for your life from a hungry polar bear, Guild Wars 2 makes it happen!

The last main feature I wish to talk about is the PvP in Guild Wars 2. If you enjoy slaying other players, taking castles, building siege weapons, or just generally making someone else’s day a mess, then this is the game for you! Guild Wars 2 has two PvP games. sPvP (structured player versus player) pits two teams of players against each-other on various maps like you may have seen in other MMO’s. The difference is that all players are the same level in sPvP and every player gets a free gear set that can only be used in sPvP. This game mode is for those who enjoy tournaments and balanced player versus player gameplay. The star of GW2′s PvP however is the alternate game called “World v World” in which your entire server (with a team cap of around a hundred players) is matched up against two other servers for a fortnight battle over a huge map. During the battle you must protect castles, defend towers, and escort supplies to and from all of your keeps in order to gain points. Players may join and leave the 3 WvW maps at any time and there is no minimum level. Whilst in WvW your character will be buffed to the maximum level (80) to try and balance things out, however unlike sPvP your gear is not changed and your armor contributes to your overall stats. World v World is the place to go for your all out PvP mayhem, and it really is a huge part of this game.

Now before we get to the “downs” of the game I would like to point out some other interesting features that you may recognize from other games, but that help to make this game so special. In GW2 there are no resources required to use your skills. No “mana” or “rage”, instead skills are balanced by each having their own cool-downs  with the exception of the Thief class who uses “initiative” for some skills. Gw2 has no set healers or tanks, each class is free to do whatever they feel they can, and anyone is free to take on any role however some classes do heal better than others. Dungeons are hard. Very Hard.

As a dedicated player this part will be hard for me. The bad parts of Guild Wars 2. It is needless to say that there are things that greatly drag this game down, the main one being that it is new. This means there are countless amounts of bugs and glitches that will frustrate you, and the server performance is much less than optimal. The main thing bugging me (along with most players) at the moment is the lack of “end game content”. Once you hit level 80 you unlock a whole new area to explore along with a few more story-line quests however these do not last long and you will soon find yourself either in world versus world with not much else to do, or creating a new character. Despite these minor downfalls I believe it is important to remember that Guild Wars 2 is a new title and most new titles take time to be tweaked and re-tweaked to perfection. In my opinion this game is well worth the money you spend, especially as a main title MMO with no subscription fee. At the moment this game tops it genre, hands down.

Avid gaming addict and geek from the UK. Contact me at [email protected]